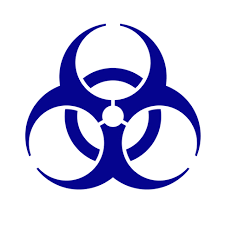 Biodefense refers to measures to restore biosecurity to a group of organisms who are, or may be, subject to biological threats or infectious diseases. Biodefense is frequently discussed in the context of bio war or bioterrorism, and is generally considered a military or emergency response term. Biodefense applies to two distinct target populations: civilian non-combatant and military combatant (troops in the field). Protection of water supplies and food supplies are often a critical part of biodefense.

It is important to note that all of the classical and modern biological weapons organisms are animal diseases, the only exception being smallpox. Thus, in any use of biological weapons, it is highly likely that animals will become ill either simultaneously with, or perhaps earlier than humans.

For example, in the case of anthrax, it is likely that by 24–36 hours after an attack, some small percentage of individuals (those with compromised immune system or who had received a large dose of the organism due to proximity to the release point) will become ill with classical symptoms and signs (including a virtually unique chest X-ray finding, often recognized by public health officials if they receive timely reports). By making these data available to local public health officials in real time, most models of anthrax epidemics indicate that more than 80% of an exposed population can receive antibiotic treatment before becoming symptomatic, and thus avoid the moderately high mortality of the disease.

The goal of biodefense is to integrate the sustained efforts of the national and homeland security, medical, public health, intelligence, diplomatic, and law enforcement communities. Health care providers and public health officers are among the first lines of defence. In some countries private, local, and provincial (state) capabilities are being augmented by and coordinated with federal assets, to provide layered defences against biological weapons attacks. During the first Gulf War the United Nations activated a biological and chemical response team, Task Force Scorpio, to respond to any potential use of weapons of mass destruction on civilians.

The traditional approach toward protecting agriculture, food, and water: focusing on the natural or unintentional introduction of a disease is being strengthened by focused efforts to address current and anticipated future biological weapons threats that may be deliberate, multiple, and repetitive.